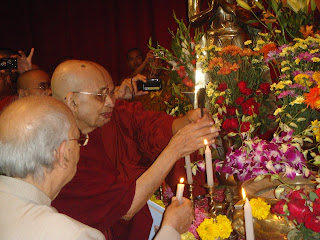 Inauguration of Bhagavan Buddha University of Pali and Theravada Buddhism

It was a long wish of Bada Bhante to establish an organisation which offered pure teachings of the Buddha in a systematic manner. It is now taking shape. In the history of Maha Bodhi Society it will be another milestone when the new building for the Bhagavan Buddha University will be inaugurated on 19th March. This building is funded by the Government of India and constructed by the PWD. We are grateful to the Prime Minister for this special grant (1.72 crore) for developing the Buddhist center of higher learning.

The Mahabodhi Academy for Pali and Buddhist Studies is already running correspondence diploma courses in Buddhist studies. It will be further extended to the undergraduate and post graduate courses, both on distant and regular modes. Discussions for collaboration are being held with Buddhist universities in Burma and Thailand. This university will offer authentic Pali and Theravada Buddhist studies as found in the sacred Pali Tipitaka. 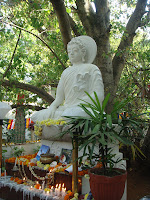 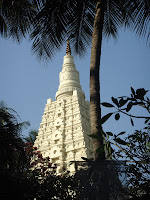 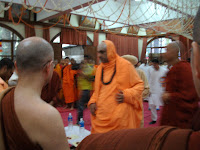 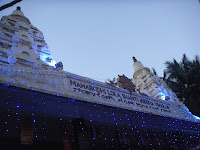 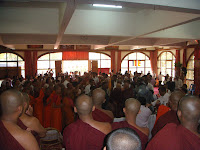 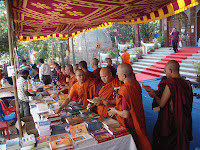 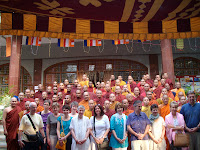 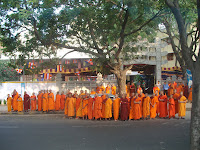 In Theravada countries they have good many universities, but none in India; Ours is going to be the first one. Though there are many universities, like Calcutta, Delhi, Bombay etc, where Theravada is taught in a limited way, the modern Nava Nalanda Mahavihara also runs Buddhist courses in a general way, not specifically meant for Pali and Theravada Buddhism, as our University aims to do here in Bangalore.

And this is how the Bhagavan Buddha University will endeavor to perpetuate this knowledge through appropriate character-building educational process, together with the practice of what is learnt, by latest scientific methods, for instance, of distant learning modes of email operated instruction, in distant places. This university will have campuses in our Bangalore, Mysore and Arunachal Pradesh educational centers.

The Maha Bodhi Bangalore centre is known as an open university, which has already set up networks in various languages to conduct the diploma level courses in distant learning process. For instance, in Kannada and English, which have about 800 students already, and then in Marathi, Hindi, Telegu, Bengali and Gujurathi. Diploma distant education courses are so organized in various cities in different states where university network offices have been set up with able project directors efficiently conducting the courses.

Besides the distant education courses, the university is building a campus at the Maha Bodhi institute of Moral and Spiritual Education at Chetanavana Centre, Bangalore. Two more campus will also be set up at our Maha Bodhi Mysore High School Center and at the Maha Bodhi College campus at Namsai, in Arunachal Pradesh. Once the Bengali network is completed at Calcutta, the Tripura center will be set up. These centers have considerable populations of Buddhists who are sufficiently interested in our activities.